Family 1st Books invites you to visit our upgraded website at www.family1stbooks.com! Check out our parenting blog titled, "Parenting, the Ultimate Relationship Challenge."

A Gem Embraced by Fall

View from the Charthouse

All day to get dinner

A Tree Tickles a Feathery Cloud

A Day of Fishing

Our Front Yard At Wally's

Taking in the beauty

Hoping to catch a fish

You Can Not Love Without Giving


"You can give without loving," says Robert Louis Stevenson, "but you can not love without giving."  Giving includes touch, a smile, listening, compliments, noticing what someone does right. Saying, "I love you" nurtures the relationship. Gifts come in many forms. Attention to exits and entrances (good-byes and welcome home) can make those we love feel special and cared about.

As children mature they discover that they get more joy from giving than they do from receiving. In the same way as love matures people find that giving brings more pleasure and fun than receiving. Giving does not belong exclusively to Christmas. For love to thrive giving continues all year. It increases the adventure and joy of the relationship. How have you gifted the one you love today? Try increasing those gifts each day in 2012.

Labels: relationship fun, what is love


No money for Christmas happened often while I was growing up. As a child, I began making presents weeks before Christmas. I turned worn out bed sheets into squares. Hemmed and decorated they became attractive handkerchiefs. At least I thought so. Once my parents dressed two of my dolls alike, glued cheap look alike wigs on their heads, and gave me the "twins" for Christmas. We made games for each other from scraps of cardboard. My dad made spinners for the games he created. My husband says he and his brothers made toys for each other out of sticks and rubber bands. He had some great sling shots and toy airplanes his brother made for him.

One year our family all made cards with gifts of time or service. "Good for 5 days of telling you a bedtime story of your choice"; "Two weeks of doing your chores"; "An hour of my time to do what you want"; "Good for a movie of your choice". Use your imagination to think of what your recipients might like. If the gift is for your special person, you can give things like a date night every week for the month of January; thirty minutes of talking time every night before we go to bed; read and discuss 2 pages of "Becoming Soul Mates" with you every day for a week.

Creative gifts take thought and planning but they can be more fun and thoughtful than anything money can buy. To give your lover an hour a day of listening time or a night out together benefits you both in ways you cannot measure. There is no limit to what you can think of to gift your lover.

No Money for Christmas and Relationship


In a time when Christmas sales of electronic gadgets and toys are soaring, how do you show love and generosity to the ones you love when you cannot buy expensive gifts? My first thought is to go back to the simple "Little House on the Prairie" days. To see the children excited over gifts of barrettes and ribbons makes us realize how much commercialism has influenced our way of equating the money value of a gift to the the measure of love we have for each other.

The T.V. commercial, "Every kiss begins with Kay" implies that the cost of the gift tells how much the giver loves the recipient. Some of our best Christmases have been when we had little money. One year each person was to give the person whose name they drew something they owned that they valued. The gifts brought tears and hugs.

Our daughter gave her brother the seven books of Narnia she treasured and had collected one by one. He knew how much she valued those books.  From her rock collection one of our daughters gave me a beautiful green malachite which I knew was her favorite rock. Love filled our living room as we exchanged gifts.


Are you dreading writing Christmas cards, wondering when you will find time? We have turned that tradition into one of the best Christmas celebrations of the Christmas season. We began writing the cards on getaways. The first year we wrote our cards at a timeshare at Lake Tahoe. No interruptions and a great incentive to finish them quickly. Unfortunately, we found that snow in December makes traveling to the mountains unpredictable. 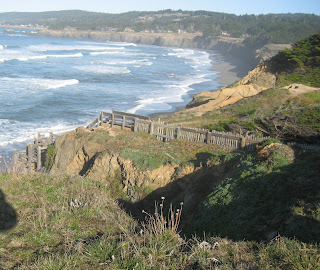 Instead we found a condo at Sea Ranch to rent for three days. Winter rates make it a bargain. We sit at the dining room table and watch the surf crashing against the rocks. Sometimes deer feed in the front yard. We take breaks to walk on the ocean trail. At Black Point the ocean roars ferociously as large waves slap the beach and gradually erode the bluffs carving out a little bigger bay each year. Flowers, eager for spring, bloom proudly in the sunshine ignoring the fact that winter has not officially begun. Yellows. reds, purples dot the greenery pushing aside the weeds.

Yesterday Everett spotted a lone crane sitting like a statue on the edge of the cliff. "Maybe if I zoom in on him, I can get him on film," he said. Captured on film, the crane still looked far away. We have looked forward to our Christmas card writing getaways for at least ten years. It has become one of our favorite Christmas celebrations.